What is the use of Address Resolution Protocol (ARP)?

The Address Resolution Protocol(ARP) is a communication protocol used to discover the data-link layer address(Layer 2 address like Media Access Control(MAC) address) associated with an Internet layer address(Layer 3 address like IPv4 address).
The protocol operates below the network layer as a part of the interface between the Open Systems Interconnection (OSI) network and OSI link layer. It is used when IPv4 is used over Ethernet. The term address resolution refers to the process of finding an address of a computer in a network.

Devices in a Local Area Network(LAN) are programmed to communicate using link layer addresses. Switches are not configured for a standard that will allow destination decisions to be based on IP within the same broadcast domain. A device that is not connected to the internet will not have an IP address. In that case, the network has to resort to using MAC addresses for communication. If a device wants to communicate with another device in the same LAN, it needs to know the MAC address of the other device’s network interface. This allows for the communication between the two end devices to be unicast.

How does ARP work?

Every device that is capable of handling IPv4 packets has an ARP table. An ARP table consists of IPv4 address to MAC address mappings. Switches do not have an ARP table as they are not equipped to handle IP packets. However, switches maintain another kind of cache mapping the MAC address of the non-switch devices connected to this LAN to the port where packets should go to reach that device. Switches will send out the packet on all the enabled ports if they do not have the destination MAC address in the cache. 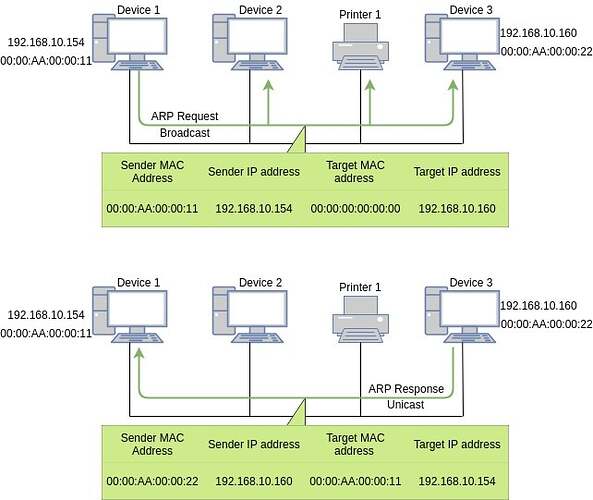