What are different ranking algorithms?

What are different ranking algorithms?

The main focus of ranking algorithms is about using machine learning methods, such as classification clustering and regression methods, to proceed the task of ranking, to improve the ranking precision, recall and optimize the precision values of models. Learning and ranking are two processes to construct learning to rank models.
I suggest you to go through this journal paper for an overview of different Rnaking Algos. 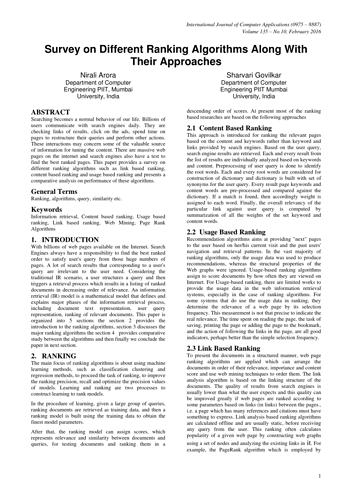 (PDF) Survey on Different Ranking Algorithms Along With Their Approaches

PDF | Searching becomes a normal behavior of our life. Billions of users communicate with search engines daily. They are checking links of results,... | Find, read and cite all the research you need on ResearchGate

Traditional ML algorithms solve a prediction problem (classification or regression) on a single instance at a time. E.g. if you are doing spam detection on email, you will look at all the features associated with that email and classify it as spam or not. The aim of traditional ML is to come up with a class (spam or no-spam) or a single numerical score for that instance.

Ranking algorithms like LTR solves a ranking problem on a list of items. The aim of LTR is to come up with optimal ordering of those items. As such, LTR doesn’t care much about the exact score that each item gets, but cares more about the relative ordering among all the items. RankNet , LambdaRank and LambdaMART are all LTR algorithms developed by Chris Burges and his colleagues at Microsoft Research.