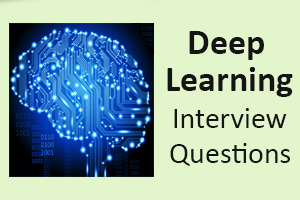 A list of top frequently asked Deep Learning Interview Questions and answers are given below.

1) What is deep learning?

Deep learning is a part of machine learning with an algorithm inspired by the structure and function of the brain, which is called an artificial neural network . In the mid-1960s, Alexey Grigorevich Ivakhnenko published the first general, while working on deep learning network. Deep learning is suited over a range of fields such as computer vision, speech recognition, natural language processing, etc.

2) What are the main differences between AI, Machine Learning, and Deep Learning?

4) What are the applications of deep learning?

There are various applications of deep learning:

5) Do you think that deep network is better than a shallow one?

Both shallow and deep networks are good enough and capable of approximating any function. But for the same level of accuracy, deeper networks can be much more efficient in terms of computation and number of parameters. Deeper networks can create deep representations. At every layer, the network learns a new, more abstract representation of the input.

6) What do you mean by “overfitting”?

Overfitting is the most common issue which occurs in deep learning. It usually occurs when a deep learning algorithm apprehends the sound of specific data. It also appears when the particular algorithm is well suitable for the data and shows up when the algorithm or model represents high variance and low bias.

Backpropagation is a training algorithm which is used for multilayer neural networks. It transfers the error information from the end of the network to all the weights inside the network. It allows the efficient computation of the gradient.

Backpropagation can be divided into the following steps:

8) What is the function of the Fourier Transform in Deep Learning?

Fourier transform package is highly efficient for analyzing, maintaining, and managing a large databases. The software is created with a high-quality feature known as the special portrayal . One can effectively utilize it to generate real-time array data, which is extremely helpful for processing all categories of signals.

9) Describe the theory of autonomous form of deep learning in a few words.

There are several forms and categories available for the particular subject, but the autonomous pattern represents independent or unspecified mathematical bases which are free from any specific categorizer or formula.

10) What is the use of Deep learning in today’s age, and how is it adding data scientists?

Deep learning has brought significant changes or revolution in the field of machine learning and data science. The concept of a complex neural network (CNN) is the main center of attention for data scientists. It is widely taken because of its advantages in performing next-level machine learning operations. The advantages of deep learning also include the process of clarifying and simplifying issues based on an algorithm due to its utmost flexible and adaptable nature. It is one of the rare procedures which allow the movement of data in independent pathways. Most of the data scientists are viewing this particular medium as an advanced additive and extended way to the existing process of machine learning and utilizing the same for solving complex day to day issues.

11) What are the deep learning frameworks or tools?

Deep learning frameworks or tools are:

12) What are the disadvantages of deep learning?

There are some disadvantages of deep learning, which are:

13) What is the meaning of term weight initialization in neural networks?

Data normalization is an essential preprocessing step, which is used to rescale values to fit in a specific range. It assures better convergence during backpropagation. In general, data normalization boils down to subtracting the mean of each data point and dividing by its standard deviation.

If the set of weights in the network is put to a zero, then all the neurons at each layer will start producing the same output and the same gradients during backpropagation.

As a result, the network cannot learn at all because there is no source of asymmetry between neurons. That is the reason why we need to add randomness to the weight initialization process.

16) What are the prerequisites for starting in Deep Learning?

There are some basic requirements for starting in Deep Learning, which are:

17) What are the supervised learning algorithms in Deep learning?

18) What are the unsupervised learning algorithms in Deep learning?

19) How many layers in the neural network?

20) What is the use of the Activation function?

21) How many types of activation function are available?

22) What is a binary step function?

The binary step function is an activation function, which is usually based on a threshold. If the input value is above or below a particular threshold limit, the neuron is activated, then it sends the same signal to the next layer. This function does not allow multi-value outputs.

23) What is the sigmoid function?

The sigmoid activation function is also called the logistic function. It is traditionally a trendy activation function for neural networks. The input data to the function is transformed into a value between 0.0 and 1.0 . Input values that are much larger than 1.0 are transformed to the value 1.0. Similarly, values that are much smaller than 0.0 are transformed into 0.0. The shape of the function for all possible inputs is an S-shape from zero up through 0.5 to 1.0. It was the default activation used on neural networks, in the early 1990s.

The hyperbolic tangent function, also known as tanh for short, is a similar shaped nonlinear activation function. It provides output values between -1.0 and 1.0 . Later in the 1990s and through the 2000s, this function was preferred over the sigmoid activation function as models. It was easier to train and often had better predictive performance.

Adoption of ReLU may easily be considered one of the few milestones in the deep learning revolution.

26) What is the use of leaky ReLU function?

The Leaky ReLU (LReLU or LReL) manages the function to allow small negative values when the input is less than zero.

27) What is the softmax function?

Swish is a new, self-gated activation function. Researchers at Google discovered the Swish function. According to their paper, it performs better than ReLU with a similar level of computational efficiency.

29) What is the most used activation function?

Relu function is the most used activation function. It helps us to solve vanishing gradient problems.

30) Can Relu function be used in output layer?

No, Relu function has to be used in hidden layers.

Softmax activation function has to be used in the output layer.

32) What do you understand by Autoencoder?

Autoencoder is an artificial neural network. It can learn representation for a set of data without any supervision. The network automatically learns by copying its input to the output; typically,internet representation consists of smaller dimensions than the input vector. As a result, they can learn efficient ways of representing the data. Autoencoder consists of two parts; an encoder tries to fit the inputs to the internal representation, and a decoder converts the internal state to the outputs.

Dropout is a cheap regulation technique used for reducing overfitting in neural networks. We randomly drop out a set of nodes at each training step. As a result, we create a different model for each training case, and all of these models share weights. It’s a form of model averaging.

34) What do you understand by Tensors?

Tensors are nothing but a de facto for representing the data in deep learning. They are just multidimensional arrays, which allows us to represent the data having higher dimensions. In general, we deal with high dimensional data sets where dimensions refer to different features present in the data set.

35) What do you understand by Boltzmann Machine?

Some important points about Boltzmann Machine-

36) What is Model Capacity?

The capacity of a deep learning neural network controls the scope of the types of mapping functions that it can learn. Model capacity can approximate any given function. When there is a higher model capacity, it means that the larger amount of information can be stored in the network.

37) What is the cost function?

A cost function describes us how well the neural network is performing with respect to its given training sample and the expected output. It may depend on variables such as weights and biases.It provides the performance of a neural network as a whole. In deep learning, our priority is to minimize the cost function. That’s why we prefer to use the concept of gradient descent.

Θ - is the parameter vector,

In machine learning, it is used to update the parameters of our model. Parameters represent the coefficients in linear regression and weights in neural networks.

40) What are the main benefits of Mini-batch Gradient Descent?

41) What is matrix element-wise multiplication? Explain with an example.

Element-wise matrix multiplication is used to take two matrices of the same dimensions. It further produces another combined matrix with the elements that are a product of corresponding elements of matrix a and b. 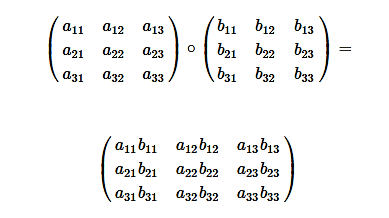 42) What do you understand by a convolutional neural network?

A convolutional neural network, often called CNN, is a feedforward neural network. It uses convolution in at least one of its layers. The convolutional layer contains a set of filter (kernels). This filter is sliding across the entire input image, computing the dot product between the weights of the filter and the input image. As a result of training, the network automatically learns filters that can detect specific features.

43) Explain the different layers of CNN.

There are four layered concepts that we should understand in CNN (Convolutional Neural Network):

RNN stands for Recurrent Neural Networks. These are the artificial neural networks which are designed to recognize patterns in sequences of data such as handwriting, text, the spoken word, genomes, and numerical time series data. RNN use backpropagation algorithm for training because of their internal memory. RNN can remember important things about the input they received, which enables them to be very precise in predicting what’s coming next.

45) What are the issues faced while training in Recurrent Networks?

Recurrent Neural Network uses backpropagation algorithm for training, but it is applied on every timestamp. It is usually known as Back-propagation Through Time (BTT).

There are two significant issues with Back-propagation, such as:

46) Explain the importance of LSTM.

LSTM stands for Long short-term memory . It is an artificial RNN (Recurrent Neural Network) architecture, which is used in the field of deep learning. LSTM has feedback connections which makes it a “general purpose computer.” It can process not only a single data point but also entire sequences of data.

They are a special kind of RNN which are capable of learning long-term dependencies.

47) What are the different layers of Autoencoders? Explain briefly.

48) What do you understand by Deep Autoencoders?

A deep autoencoder is the combination of two, symmetrical deep-belief networks:

49) What are the three steps to developing the necessary assumption structure in Deep learning?

50) What do you understand by Perceptron? Also, explain its type.

A perceptron is a neural network unit (an artificial neuron) that does certain computations to detect features. It is an algorithm for supervised learning of binary classifiers. This algorithm is used to enable neurons to learn and processes elements in the training set one at a time. 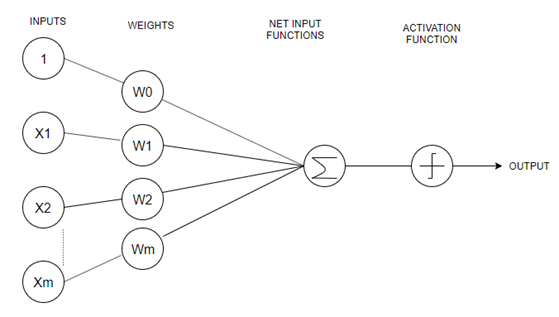 There are two types of perceptrons:

Let me also share questions from published material which tests if the candidate is well prepared to understand the current literature/existing approaches. This is by no means an exhaustive list: