Differentiate A White Box Test From A Black Box Test?

During a white box testing, the team that is responsible for performing the test is informed about the details related to it but in case of black box it’s the opposite. When black box testing is done, the testing team is not given any information and is rather kept in dark.

Black box testing is the Software testing method which is used to test the software without knowing the internal structure of code or program. 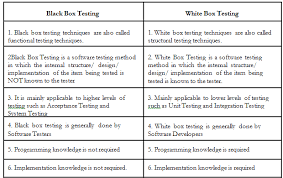 White box testing is the software testing method in which internal structure is being known to tester who is going to test the software.